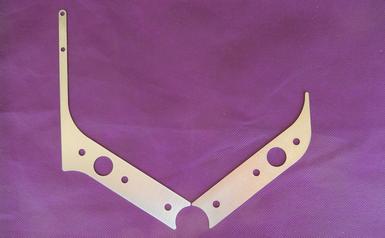 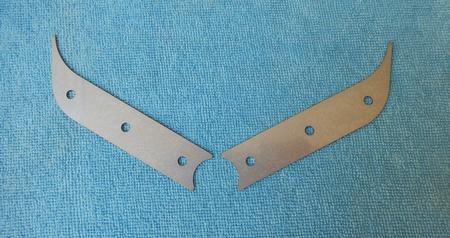 Over the years the flipper return frames, also known as flipper ball guides or even inlane guides, have become mushroomed and peened over where the frame meets the flipper bat. This wear causes the ball to hop over the flipper or get trapped between the base of the flipper and the frame.  For the past several years we've been relegated to scavenging frames from parted games in hopes they will be better than what we have. Failing that we ended up grinding and filing the frames which may make them look better but simply will not fix the ball hop issue. Put that file down MacGyver! Thanks to the help of dedicated pinball fans- Jim Palson, Steve Turner, Andy Miner, Scott Saluga and Kristof Vandermeeren, I've been able to remake a few of the more common frames. Big thanks to Bob Langelius too for helping with drawings for the Funhouse frames, Matt Behrens for WW and JM Ratkos for CFTBL!

To start off I've made direct replacements for Williams part number A-8108-R, A-8108-L and B-8239-1. These fit many, many games from 1980 through the 90's. Be sure to check the pictures against your game or your manual and/or parts manual if you have them.   I've discovered that with Williams games in particular, they've used different part numbers even if the frame itself hasnt been revised. Click the pics to enlarge and make the captions readable.

What do I mean by "enhanced"?
I simply mean that I've brought the ball roll edge of the frame up to the level of the flipper rubber. For some unknown reason Williams wasn't very precise with both the width of the frames nor the placement. This is crazy obvious on games like Firepower which uses a B-8239 on the left side and an A-8108 on the right. This is a VERY common frame set used on MANY games, including many Data East games. The obvious difference is the width across the frame. The B-8239 is 1" wide. The A-8108 is .93". A typical modern flipper bat with rubber is about .85" at the widest point- the "hip". So I needed to make the frames the same width and align the mounting holes such that the ball roll edge of the frame ends up on the same plane as the flipper rubber. In a few cases I have to LOWER the ball roll line. On others I also close the gap between the frame and flipper bat. Thats what I mean by "enhanced".

Is there still room for error? Unfortunately, yes. I cannot control where the manufacturers located the mounting holes on the playfield, for example. However my enhancement does resolve the vast majority of hop problems. In extreme cases where the frames were screwed down way off the user may need to plug and redrill the mount screw holes for best alignment. I've only seen this twice so far though.

Bally was also guilty of this lackadaisical sizing and placement of flipper frames so I've been slowly gathering them up and enhancing them as well. Many early Bally's used butyrate plastic! Not only did they break but they continuously shrink and warp with heat from lamps and time. I'm making my stainless frames for these that go under the plastic so you keep the appearance but gain a MUCH better playing game. See pics below

First lets look at the common wear areas on a flipper return frame. What should be a straight, smooth transition to the flipper has become a dip, the reverse of a speed bump if you will. This dip cause a ball to launch up and over the flipper instead of rolling smoothly down.

Wear at the junction of frame and flipper bat on a Road Kings. This causes a ball trap and can be quite annoying shoving and flipping to loosen the ball.

BEFORE AND AFTER VIDEOS

Grant Quinn made these slow motion videos on his Grand Lizard showing typical ball hop on factory frames and then no hop with my enhanced frames installed. These videos dramatically show what I've tried to explain in the text above. Grand Lizard uses A-8108 left and right

On the left are the direct replacements for the purist (phasing out!). On the right is my enhanced version

The pic on the right shows the difference between the enhanced and original more clearly.

Below are pics of Steve's Firepower showing the fit of the new frames.

Wonderful! This is the direct replacement set.

Here's my enhanced A-8108-R on Steve's Firepower. Note the precise, smooth line from guide to flipper. MUCH better than stock - ZERO ball hop!

Phoenix adapted to use my A-8151 frames by Scott Harvey - WOW!

Keith Maffei upgraded his Tri-Zone with my enhanced A-8108 set- check the super clean line for the ball to roll on- Smooooth!

Pictures above show all variations I'm making. Check back often as more will be added. I'm making some game specific sets now too. In all cases check the part numbers against your games manual as the same types are used in many games across multiple generations.

Steve Turner created a nice guide showing how to install frames with attached bell spacers. Click HERE for his guide, thanks again Steve!